Crystal Palace will have come away from their Saturday match against West Ham the more pleased of the two sides.

Wilfried Zaha scored a very late equaliser for Roy Hodgson’s side in a game they’ll feel they should have won, but will be delighted not to lose given they were behind at the end of 90 minutes.

Joe Hart made a series of saves to keep West Ham in the lead, but couldn’t prevent Zaha’s equaliser. Criticising the England international is these days far more socially acceptable than praising him, so Hart hasn’t exactly received a great deal of credit for his efforts. 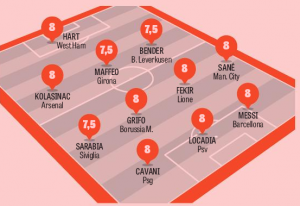 But the saves against Crystal Palace have been noticed by Gazzetta dello Sport, who include the West Ham goalkeeper in their European Team of the Week. One of three Premier League players, no performance rated more highly for Gazzetta than Hart’s.

Spending last season on loan at Torino, the 30 year old did better than a lot of the English perceptions. Working hard to get fans on his side, Hart certainly wasn’t flawless in Turin, but was a steady stopper for the club during the last campaign.

West Ham efforts to convince player detailed – ‘Sent an emissary’ last week, but he was ‘not impressed’