On July 3rd, Barcelona confirmed Samuel Umtiti is struggling with a “left knee problem” and the centre-back will “undergo conservative treatment” to regain full fitness.

Prior to his last injury setback, the defender was made aware that West Ham United and Everton are ‘thinking of him’.

This is according to Mundo Deportivo, who state Umtiti had interest from Ligue 1 and the Premier League.

It’s claimed the Hammers and Carlo Ancelotti’s side, along with Lyon, Marseille and Rennes contacted the La Liga side to register interest in the 26-year-old’s situation. This was before the France international’s latest injury setback.

The Catalan club then decided not to entertain any proposals because the former Lyon man’s intention was to continue at the Camp Nou.

Even though player wants to stay at the club, Mundo now claim a summer move is ‘inevitable’.

Barca are also aware that no club are ready to pay a transfer fee to sign Umtiti because of his injury woes over the last two years and finances being impacted by the Covid-19 crisis.

Quique Setién’s side have a formula to let the World Cup winner leave this summer, which is through a loan deal with inclusion of a purchase option.

When the likes of West Ham and Everton contacted Barca to register an interest in Umtiti’s situation, the latter did not entertain it. 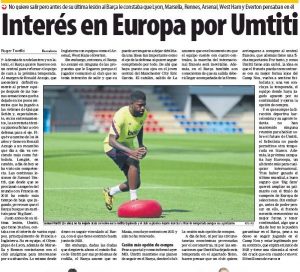 The Spanish giants have now changed their stance and are ready to do business, if Mundo’s report is to be believed.

It remains to be seen if David Moyes’ side, the Toffees and other clubs are still interested in the Frenchman after he picked up another injury at the start of this month.