Recently thumped 4-1 by Leicester City, West Ham aren’t in the best of ways, and with a busy second half of the season ahead, David Moyes knows he needs to turn things around relatively quickly.

The club are currently hovering just above the relegation zone in 17th, and with a number of frustrating injuries decimating the squad, reinforcements are needed.

A new defensive midfielder is needed, with Steven Nzonzi heavily mentioned as an option, but a new name is now circulating in Italy, as Messaggero Veneto reckon West Ham have turned their attention to Seko Fofana.

The Udinese man has a number of admirers around Europe, including past interest from Leicester in the Premier League, but it’s the Hammers who are the latest to have come forward.

The local newspaper explain that Gino Pozzo, the Serie A club’s owner, could find a number of offers on his table on Monday. 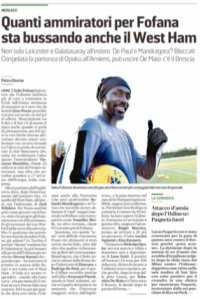 For the concerned Premier League sides, the asking price is said to be around €22m, while that figure could drop to €17m for the rest of Europe, including Italy.

One of the reasons for this, other than the usual ‘Premier League tax’ could be the fact that selling Fofana to West Ham and strengthening them would be ‘playing with fire’ for Pozzo, as he would be directly helping one of Watford’s rivals in the relegation fight.

It’s a new name, and one we’ll be keeping an eye on.