This weekend, reports from the English media have been claiming West Ham United are willing to sign Gonzalo Plata from Sporting.

So as usual, the Portuguese media comes up today bringing their side of the situation, and detailing what it will take for the Hammers to get the 20-year-old.

Newspaper Record claims that Sporting are currently demanding €20m for the player, and could even be convinced of selling him for less, as there are too many wingers in the squad.

However, things aren’t so simple. The Lions actually only own 50% of his rights, and are in negotiations with his former club Independiente del Vale to get the other half. 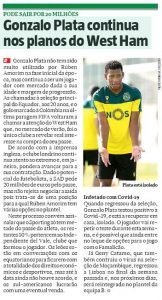 That means that in case Sporting manage to get the full share, the price they’ll demand for the sale will depend on how much they’ll pay for the 50%.

For now, in case they do sell him for €20m, then half of it goes to the Ecuadorian side.

Gonzalo Plata only has 64 minutes played for the Lisbon club this season, but is apparently convincing West Ham with his performances for the national team.