Marko Arnautović left West Ham United for Chinese club Shanghai SIPG a few days ago, months after he was heavily linked with a move away from the London Stadium in January.

The Hammers are in the market looking for a replacement for the former Stoke City man and after failing to sign Valencia bound Maxi Gomez, they will have look elsewhere in the market.

The Italy international has the experience of playing in the Premier League, having represented Manchester City and Liverpool in the past.

It’s clear that West Ham are in the market for a striker, but the report does not specify whether or not they’ve made any real move for Balotelli, who is now at an important crossroads in his career. 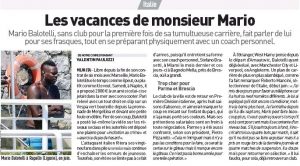 Get this move wrong, and any hope of getting back to his best level and returning to the Italy team is likely over.