It doesn’t matter what the English media say, Gazzetta dello Sport are adamant that Wolverhampton Wanderers have taken an interest in Christian Eriksen.

The Dane is looking for a new club after failing to impose himself at Inter, but the lack of serious contenders for his services has made life a tad difficult.

The likes of Arsenal and Manchester United have since disappeared, leaving Wolves, Ajax and West Ham as the interested parties.

That’s according to Gazzetta, who explain that both the Dutch club and Nuno Espírito Santo’s side have ‘informed themselves’ about the playmaker, but there’s little else out there. 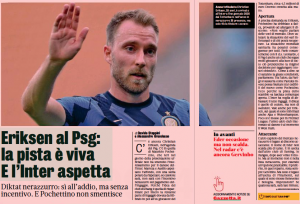 They then add ‘the only other team interested in the Dane at the moment are West Ham’.

This comes a day after Corriere dello Sport stated Aston Villa had joined the race thanks to intermediaries, but they don’t get a mention, leaving the door open for David Moyes to make his move with little competition.

We’ll have to wait and see what comes from all this, but it’s fair to say Eriksen might have to lower his expectations after a year of struggle in Serie A, perhaps swallowing his pride and go down a level to rekindle what was once a very successful career.