Newspaper O Jogo claims that Sporting need to balance their books, and the midfielder is the best product they have to raise a few millions quickly.

The club made a bit over €50m during the summer transfer window, but needed at least €70m to reach their financial goals. 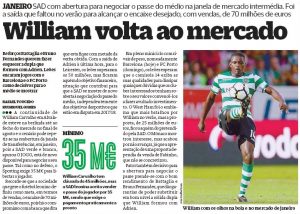 The negotiations with West Ham are obviously mentioned in the story, as O Jogo claims that the Hammers couldn’t offer more than €25m to take the player.

This time, it’s said that €35m should be enough to buy him, although there’s no information on if the Hammers would be back for Carvalho or not.

Sporting have two important games ahead, against Barcelona and Porto, and it’s believed that William could show his worth and convince other clubs to go for him in January.

After all that public war, would West Ham still bid for him? Some recent reports believe they will.

“It will be a blast” – Ex Newcastle man excited by potential takeover, labels fans ‘incredible’