The summer transfer window is coming, and with it, William Carvalho is back to the Portuguese media’s headlines.

As you can imagine, the midfielder’s departure from Sporting is already being speculated by the local papers, who believe the club could be letting him go at the end of the season.

Record claims that there are several sides who want him, especially in England, where West Ham, Everton, West Brom and Arsenal all have shown interest for the player in the past. And the Lions would have no problem seeing him leave this time.

But the funny thing is that all this good will from Sporting to negotiate is only partial, because they won’t accept any price that is lower than the player’s €45m release clause.

So if he’s leaving for the release clause, the club doesn’t really have the right to say yes or no. That’s what makes this kind of story totally pointless. 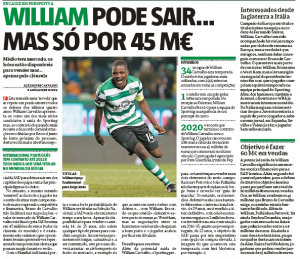 Although Record have mentioned that list of four English clubs who have been interested in William, only the Hammers have been heavily linked to him this season.

Reports have been saying that even after the failed negotiations last summer, the Premier League side would still be keen on bringing him to London Stadium. That would be one of the reasons why the clubs have officialy announced that there are no hard feelings between them.