On Monday, it was reported that West Ham United had decided to turn their attention to Arnaut Danjuma, currently at Villarreal.

The Dutchman, arriving in Spain from AFC Bournemouth, exploded under Unai Emery, and was one of the main reasons they did so well in the Champions League last year.

This led to the player being linked with a number of Premier League sides, big ones at that, and we now see West Ham join the mix.

While they might not have Champions League football to offer, the Hammers do enjoy a good reputation these days thanks to the work put in by David Moyes, and will feature in the Conference League in the upcoming campaign.

That last point might not be the most appealing, but the first still stands, as Danjuma certainly likes the idea of returning to England to prove himself.

Either way, El Periódico Mediterráneo have a bit more on the matter on Tuesday, with it said that Villarreal ‘already know, through the agents of the Dutch forward’ that there is interest from West Ham.

With claims the Hammers have €150m to improve their squad, some of which already spent on Nayef Aguerd and Alphonse Aréola, the next move ‘is to strengthen the attack’.

Danjuma’s agent ‘has communicated West Ham’s interest in the Dutchman’, who has asked Villarreal ‘to accept his departure if an offer arrives that satisfies the parties’. 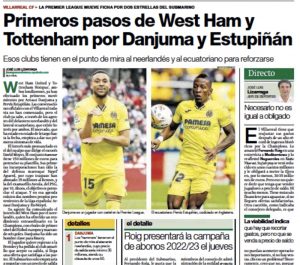 Regarding a fee, the La Liga club ‘would only start negotiating with a starting price of €35m, including bonuses for objectives in the operation’.

While Danjuma is a player whose exit would help the wage bill, it’s made clear Villarreal don’t have to sell and have ‘the financial muscle to endure in the event an offer does not arrive’.

In fact, we might see some progress in the near future, as the talks between the Spanish and English clubs ‘once the first contacts with Danjuma’s representative have begun, may begin this week’.