There’s nothing new there, but the Belgian newspaper do have a little snippet of interesting information.

It’s reported that for the match between Anderlecht and Club Brugge at the weekend, West Ham sent a scout to cast another eye, once again, over the midfielder-turned-defender.

The Hammers didn’t send just any club official, with Stuart Pearce, David Moyes’ assistant, going along to check the youngster out. West Ham have repeatedly scouted Dendoncker, and that they’re still doing it backs up claims from the winter window that Moyes had reverted to Dithering Dave again.

Back to Crystal Palace. There’s now a rash of reports claiming Aad de Mos, an analyst of Belgian football, has said Dendoncker is set to snub/turn down/turn his back on Chelsea in favour of move to Palace. 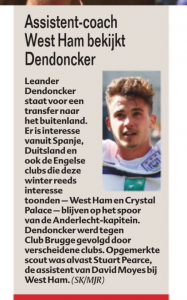 De Mos said: “It will not be at the top. He won’t go to Chelsea, rather to a club like Crystal Palace or Everton. It is important to keep that pressure away. At one point, a transfer seemed more important than his game, which he suffered from. In the past few weeks he is better.”

Several English newspapers/websites got the quotes from us (we originally found them at Gazet van Antwerpen) and decided to dramatise the whole thing to make it into something it never was.

As we presented, it was just an analyst talking and sharing his opinion, not De Mos saying ‘DENDONCKER SET TO SNUB CHELSEA FOR CRYSTAL PALACE’.