West Ham United were reportedly one of the few clubs who had scouts watching Belenenses playing Marítimo in the Portuguese league this weekend.

Newspapers A Bola and O Jogo both report the Hammers’ visit to Setúbal, although neither of them seem to know who the English side were watching or why were they there.

It surely wasn’t the best match of the weekend, with Belenenses playing far from their real home and losing 1-0 to Marítimo.

The only players who truly deserved some praise for their performance were Marítimo right-back Nanú and left winger Barrera, who scored the winner in the second half.

With both of them being over 23, they’re not in the usual prospect group which would make West Ham transfer interest understandable. 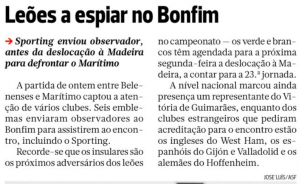 Other clubs who had scouts at this match were Sporting, Vitória Guimarães, Sporting Gijon, Real Valladolid and Hoffenheim.