The Italian side are keen to get rid of the centre back, who is down the pecking order as far as new manager Andrea Pirlo is concerned.

That makes him a sellable asset, with the Italian giants keen to raise funds to complete deals for the likes of Federico Chiesa and Moise Kean.

Thus, Rugani has been linked with a move away, and West Ham have been named among his suitors on several occasions.

Corriere Torino now say they are at the front of the queue, saying that Valencia’s unwillingness to sign Rugani on anything but a ‘dry loan’ has put the Hammers in pole position for his signature.

The newspaper states West Ham have been ‘courting’ the centre back for a long time and that Juventus hope to make €20m from a sale. 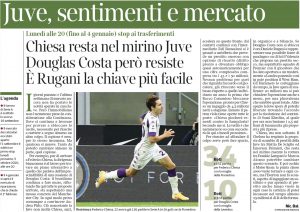 However, that price is far from firm and ‘the operation can be closed for less’ as they are almost guaranteed to make a profit having paid just £4.5m to sign him from Empoli in 2015.

Interestingly there is no mention of Newcastle, despite reports in Italy last night stating that they could be making a bid sooner rather than later.

Instead, it appears West Ham are out in front and could get themselves a bargain with a little bit of negotiating.