Home Europe West Ham ‘ready to return to the charge’ for player as Liverpool...
SHARE

It’s not everyday that Liverpool and West Ham are vying over the same player, but it appears to be currently happening.

That’s according to Corriere dello Sport, at least, who explain both the Reds and the Hammers are keeping an eye on Nikola Milenkovic’s situation at Fiorentina.

Having entered the final year of his contract with the Serie A club, the Serbian defender doesn’t appear overly keen to renew, which has opened the door for clubs to circle.

Liverpool were linked with Milenkovic prior to their purchase of Ibrahima Konaté, but there is always the need for strength in depth, and that’s why they are ‘always very attentive’ to his situation. 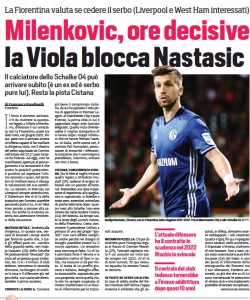 As for West Ham, they are ‘ready to return to the charge’ for the centre-back’s signing, suggesting they could come forward with an offer in the foreseeable future.

Fiorentina, down their end, have all but signed Matija Nastasic from Schalke 04, all but ‘reserving’ him, should Milenkovic be sold, allowing them to replace him almost immediately.