It doesn’t matter what year it is, West Ham are always on the lookout for a new striker.

Signing Sébastien Haller last year, the Hammers thought they might have found their man for the foreseeable future, but a rather disappointing first season by the Frenchman’s standards has led them to look for more competition going forward.

Their 4-0 dismantling of Wolverhampton Wanderers hasn’t changed that either, as France Football believe David Moyes is targeting Gaëtan Laborde, currently at Montpellier.

The forward, who was once linked with moves to Arsenal and Liverpool, has been a long-term target for the Hammers, according to the magazine, who said they ‘thought about him’ three years ago without ever pushing any further… ‘until now’. 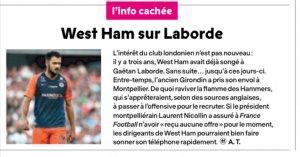 France Football have been told by ‘English sources’ that West Ham ‘are preparing to move on the offensive to sign him’, and while Montpellier’s president, Laurent Nicollin, has told the outlet he ‘hasn’t received an offer’ for his player, it’s then speculated the London club ‘could make his phone ring soon’.

There isn’t any more information than that, but we’ll be keeping an eye on it going forward, because it’s just a story that makes sense.

He won’t be overly expensive and while he isn’t exactly the most prolific of goalscorer, he would provide an extra presence up front that could help unlock Haller even further.