Continuously linked with an exit from Juventus, the Italian media seem intent on making sure Luca Pellegrini ends up in England.

From the off, the newspapers have been talking of a move to the Premier League, with both West Ham and Fulham named as clubs his agent, Vincenzo Raiola, Mino’s nephew, is talking to.

The Hammers continue to be linked on Monday, with Corriere dello Sport mentioning them in an article including the left-back.

It’s pointed out the defender is ‘inclined to continue his career in the Premier League’, where he is ‘followed by West Ham (in pole)’ and the aforementioned newly-promoted London side. 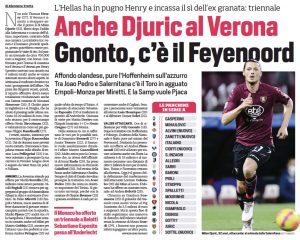 Once again, there’s no mention of price, but previous reports suggested Juventus value him at around €10-12m.

That’s certainly affordable to West Ham, who, however, also have other areas to strengthen this summer, notably up front.

Still, with Aaron Cresswell entering the final year of his Hammers contract, perhaps the 23-year-old is seen as an ideal long-term solution in the role.