During the January window, West Ham were linked with a number of options to sign a striker. Rather than it just being transfer rumour noise, it was clear the Hammers were making real efforts, having agreed to sell Sebastien Haller to Ajax in what was a surprise move.

Several of the targets which were in place in the winter are likely to be so again in the coming window, and L’Equipe believe Gaëtan Laborde is one of these.

The French newspaper carry an interview with Laborde in their Friday edition, and they introduce the chat with the following line: ‘Montpellier’s top scorer this season is leaving, West Ham and Zenit St. Petersburg seem to be on pole to host him.’

The interview began with Laborde making it clear he feels he’s reached the end of this stage of his career, with the 27-year-old looking for bigger horizons.

He’s keen on playing European football, something West Ham can offer, and when asked directly about the Hammers and whether contact exists, he sat on the fence a little: “Not all of the lights were green to leave in January. I stuck with the club and gave it my all. Laurent Nicollin (the president of the MHSC) knows it. We are both fair. I know the opportunities are there.” 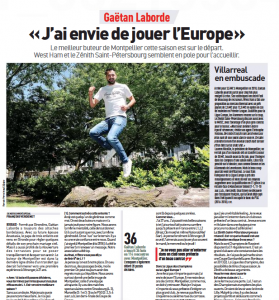 L’Equipe say that West Ham’s winter proposal was a loan worth €2.5m, with an option to make it permanent for €12.5m, as long as the club avoided relegation from the Premier League.

David Moyes side remain very much in the picture, and would be battling with Zenit, who would offer a bigger financial package to Laborde. Both clubs are in talks.

Montpellier are said to be looking to receive around €20m, and other clubs in the picture are Villarreal, Lille, Rennes and Bayer Leverkusen.