Thursday saw the emergence of a new story involving Pedro Obiang and a return to Italy, where he spent most of his career prior to his West Ham move.

Already close to leaving London Stadium twice (for Sampdoria last summer and Fiorentina in January) over the past 12 months, the midfielder could now have yet another chance thanks to AS Roma.

The interest comes around the same time as Paulo Fonseca nears being appointed as Claudio Ranieri’s successor in Italy’s capital, and the first steps have been taken by all parties involved to get a deal for the 27-year-old sorted.

According to Il Tempo, the player’s agent has ‘already met’ with the Serie A side ‘in recent days’, although the details and outcome of said meeting are not divulged. 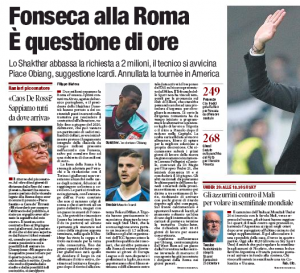 However, if it was anything but good news, Roma’s desire to sign the West Ham man would have disappeared from the press and wouldn’t still be reported on, suggesting positive exchanges took place.

Joining for just for just under £5.5m back in 2015, Obiang was only a rotation option for Manuel Pellegrini, coming off the bench more often than not.