So far in this transfer window, Pedro Obiang has to be one of the players linked with the most clubs without anything happening.

We’ve already lost count, but Bologna have been the latest, and perhaps the most consistent, as they look around the market for a new midfielder.

Each have their pluses and minuses, and the Hammers’ player is the one with extremes on both sides.

As is the case with any transfer to Serie A from the Premier League, wages are the main issues, as his €35k/week net contract at West Ham would be difficult to match. 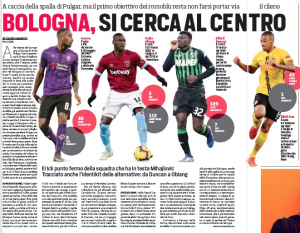 The positive is that he’d be cheaper transfer fee wise than Alfred Duncan, and would be ‘happy’ to return to work under Sinisa Mihajlovic, who was his manager during his time at Sampdoria.

There’s no mention of the fee, but if the Sassuolo midfielder is quoted at €15m, then one can imagine €10m or so would be enough for Obiang.

That would allow West Ham to make their money back, having spent an initial £5.4m on his services back in 2015.