West Ham youngster Benicio Baker-Boaitey is now closer on joining Porto, according to updates from the Portuguese media today.

Back at the start of the week, newspaper O Jogo had already claimed that the move was ‘very well forwarded’ and could be done in the coming days.

Now the same outlet reports that Baker-Boaitey has already landed in Portugal, as he’s currently staying at a hotel in Vila Nova de Gaia.

The 16-year-old is said to be waiting for the end of the process so he can finally be announced by the Dragons. He’s initially joining the club’s U-19 squad. 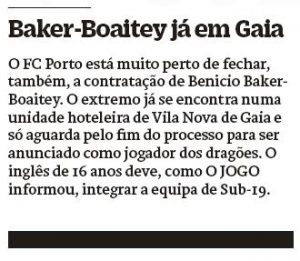 Reports about the player’s situation started emerging in May, with the Portuguese media saying West Ham were having a hard time to renew the teenager’s contract.

It was initially claimed that the likes of Barcelona, Bayern Munich, Liverpool and Manchester United were all interested in Baker-Boaitey, but it seems it’s really Porto who are winning this race.

This week, the Dragons also announced the signing of Danny Loader, who left England following the end of his contract with Reading.