West Ham United have reportedly outbid Benfica in the race for the Brazilian winger Bernard.

Newspaper O Jogo comes up with a story this Friday saying that the player’s agent Adriano Spadoto travelled to London on Thursday night, and is set to meet club officials today.

Bernard is currently a free agent, as he let his contract with Shakhtar Donetsk expire this summer so he could choose his next destination with no restrictions.

According to the newspaper, West Ham are offering the player a signing bonus of over €7m, plus a salary of €4m after tax per season. 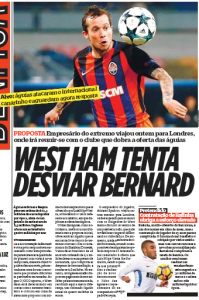 That’s better than Benfica’s last offer, which was of a €8.5m bonus plus an annual salary of €2.3m. That’s why the Eagles are so afraid that their target is moving to the Premier League.

West Ham’s interest in Bernard had already been reported by the Brazilian media this month, so these updates from Portugal just back up that the club are indeed following the 25-year-old.

With the club currently closing the signing of Felipe Anderson from Lazio, maybe Bernard would be happy to have another Brazilian in the squad with him.