West Ham United have scheduled a meeting for the signing of Benfica midfielder Gedson Fernandes, according to reports from Portugal today.

Newspaper Record says the Hammers will be in Lisbon next week and will make a formal offer to take the 20-year-old to England.

The Premier League side will be putting on the table a loan deal with an option to buy the player, which will include some performance goals for it to be automatically triggered.

Record says the bid is good for the midfielder, who would have the chance to have a bigger salary at West Ham than he does at Benfica. 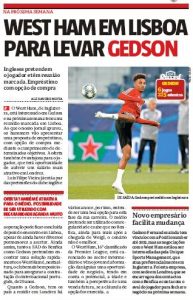 It’s claimed Benfica president Luis Felipe Vieira is aware of West Ham’s intentions and there could be a deal after this meeting in Lisbon. Both the Portuguese club and the player want the situation to be sorted out as soon as possible, and West Ham are the best positioned club to take him.

There are two other factors that could make things easier for the Hammers.

Firstly, Gedson’s parents live in London, so he would be closer to them. And it’s also claimed that Unique Sports Management have been handling exit talks. They’re based in London, and according to Record, they have the player’s approval to close a deal next week.