West Ham had an official attend the match between Vitoria Guimaraes and Sporting on Saturday evening, report Record.

Despite being away from home, Sporting ran out 5-0 winners, after a difficult week for the club off the pitch.

President Bruno de Carvalho has once again been the centre of attention for all the wrong reasons, and William Carvalho is pushing to leave the club for West Ham.

Carvalho wasn’t involved in the match, and he wasn’t scheduled to be either, but Sporting didn’t miss him.

It’s almost certain West Ham didn’t have someone there to watch Carvalho, and it’s unlikely they just broke off from Lisbon negotiations to sign the midfielder, and attended the game. 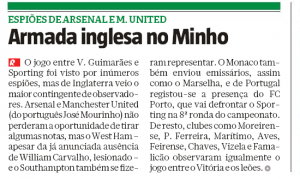 Guimaraes is more than a three hour drive from Lisbon, so, whilst there’s every chance West Ham have been following Sporting officials around, badgering them about Carvalho, they could also be checking out other targets.

Adrien Silva, also on the market this summer, and linked to West Ham, had a good game for Sporting, playing well in midfield and allowing others to shine.