West Ham United were one of the clubs to have scouts at the great match between Portimonense and Porto on Sunday.

It was a game of big emotions at Estádio Municipal de Portimão. The Dragons were winning 2-0 by halftime, and although the home side managed to equalise, there was still time for the Northern giants to find a winner in stoppage time.

It’s newspaper Record who reports the list of scouts today, although they don’t point out any possible target for the officials.

The Hammers have been linked to Moussa Marega for a long time now, but we’ll never know if there was really an interest or if the club was named as part of the striker’s big quest to move to the Premier League. 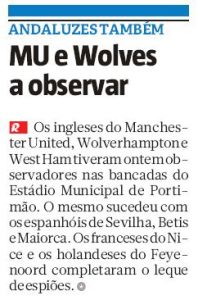 The truth is he couldn’t really impress yesterday, since he was one of Porto’s poorest players, yet that won’t stop him being pushed back onto to West Ham’s agenda given the scouting trip.

Portimonense right-back Kōki Anzai had a good performance and and scored a great goal which may have caught attention from the scouts.

For Porto, midfielders Otavio and Luis Diaz were the best players, having huge importance controlling the middle of the park.

Manchester United and Wolverhampton Wanderers also scouted this match, along with the likes of Sevilla, Betis, Mallorca, Nice and Feyenoord.

Sébastien Haller | A man prepared to do ‘anything’ to get what he wants, including ultimate striker sacrifice.@thcoast looks at background and career and wonders whether Hammers have found the man they've so long been searching for. https://t.co/QvWqLkr5Q2 #whufc #coyi pic.twitter.com/C4gcc3MFvu