According to Posta, West Ham United are looking to use Pedro Obiang in order land Besiktas midfielder Gary Medel.

The Chilean midfielder has been linked with a move to West Ham for around a year and it’s previously been reported his compatriot Manuel Pellegrini wants to work with the player.

However, Posta claim Besiktas’ stance with Medel are making things difficult for the Hammers as the Turkish club are only looking to accept offers in excess of €5m.

Despite these complications, Posta claim West Ham have offered Obiang to the Super Lig club in exchange for Medel. Besiktas have reportedly asked for time to think about the offer.

This makes little sense, given West Ham could likely get more than €5m from any number of Serie A clubs for Obiang, with Celta Vigo also interested in the player.

Once again this appears to be the Turkish media being overly optimistic on transfer claims for their big clubs. 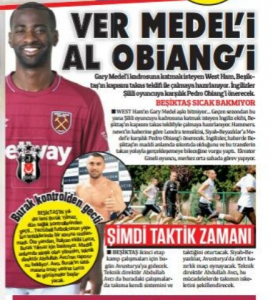