Home Europe West Ham and Newcastle ‘have come forward over past few weeks’ for...
SHARE

With the Premier League season now over, clubs can turn their attention to bolstering their squad, and in West Ham’s case, that means once again finding a striker.

As Javier Hernandez and Lucas Perez likely head towards the exit at London Stadium this summer, that would leave Manuel Pellegrini with just Marko Arnautovic leading the frontline, as long as he also sticks around.

Another club likely to need a striker are Newcastle, as Salomon Rondon (currently on loan) and Ayoze Perez are expected to find moves elsewhere (with the former of the two also linked to West Ham).

According to Corriere dello Sport, both clubs are after the same man, as Club Brugge’s Wesley Moraes will be looking for an upgrade in his career in the coming months. 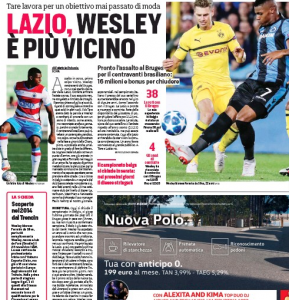 Lazio are also after the Brazilian, which is where the story comes from, but the Italian newspaper state both the Hammers and the Magpies have ‘come forward over the past few weeks’, according to the player’s agent.

What that entails isn’t revealed, meaning it could be just a chat with the representative, or an offer to the Jupiler Pro League side.

Either way, it appears West Ham and Newcastle are after a physically imposing striker this summer.