On Monday we covered various reactions from Spain relating to West Ham’s interest in Youssef En-Nesyri. The slant was generally that Sevilla don’t want to sell this month, but could be convinced if a huge offer comes in.

The Hammers were thought to have put forward a €30m package, consisting of €25m in a fixed payment plus €5m in potential bonuses. This was considered nowhere near enough.

That was the general consensus, but it wasn’t stated what Sevilla would accept for a move in the winter market.

Tuesday’s edition of Marca changes that. They state the La Liga club won’t sell their top scorer for less than €40m this month.

That’s €10m more than the West Ham package, and not a huge amount in the modern market, especially to take away a top club’s important player midway through the season. 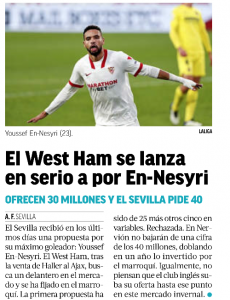 Marca say West Ham are ‘serious’ in their pursuit, and it remains to be seen if they’ll add the extra €10m.

Even then, a lot may depend on the targets for bonuses included in the deal.

West Ham have previously proposed clauses including things like Champions League qualification, and it’s unlikely Sevilla would go for that.