Despite West Ham’s latest attempts to scupper what seemed like a done deal, Maxi Gomez appears to still be heading to Valencia.

Because of that, the Hammers appear to have turned to one of their favourite problems solvers in Willie McKay as they frantically continue their search for a goalscorer.

On Wednesday, news started circulating West Ham were getting closer to signing Sebastien Haller from Eintracht Frankfurt, with some even going as jumping the gun and saying it was done.

L’Equipe provide their update on Thursday morning, and while they do confirm Manuel Pellegrini’s side are interested, it certainly isn’t done yet. 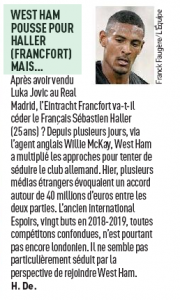 West Ham have indeed ‘multiplied the approaches’ to try and ‘seduce’ the German club, and while they do hint there might be an agreement of €40m, they point out that Haller still isn’t in London.

The reason for that is he ‘isn’t particularly attracted by the prospect of joining’ the Premier League club.

After all, who can blame him? He’s found himself a very good club in Eintracht Frankfurt, one who made it to the Europa League semi-finals last season and is in the competition’s qualifiers once again after finishing 7th in the Bundesliga.

Oh, and with Luka Jovic now in Madrid, Haller is now the main main up top with Ante Rebic.