West Ham have moved for Jens Stryger Larsen ‘in the past few hours’, according to claims in Monday’s edition of Corriere dello Sport.

The Italian newspaper explains the player has already said no to a potential move to Galatasaray, leaving the route open to other clubs, now including the Hammers.

Moving to Udinese in 2017 from Austria Wien, the 30-year-old has less than a year left on his current contract. With no renewal seemingly on the way, that presents a signing opportunity at a reasonable cost.

Corriere dello Sport say West Ham could now ‘overtake’ all the other clubs in the race for the Udinese player, and they sound optimistic when it comes to the chances of David Moyes’ side.

Developments are expected quickly, with further contact between the Premier League club and Udinese said to be happening ‘in the next few hours’. 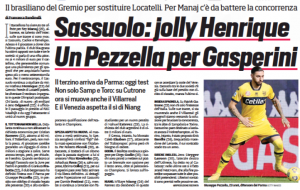 Jens Stryger Larsen played 33 matches for Udinese in Serie A last season. Although he’s known as a right back, he played a variety of roles on both sides of the pitch, so could be a good squad option for Moyes.

‘Discussions in recent hours’ – Newcastle in talks for further signing, have plan to get deal

Agent says claims of player’s refusal to Tottenham are not true...

Player has ‘reached an agreement’ to join Liverpool – ‘Agreement is...

‘Discussions in recent hours’ – Newcastle in talks for further signing,...