We’ve covered it multiple times in the past, most recently during the January transfer window, and while no deal took place then, the summer could be very different.

The Serie A side will most likely be losing Milan Badelj, probably to one of their league rivals, and they’ll need to replace him, with the former Spain U21 international high up on their list.

The problem, and it’s one we read about every day when clubs from abroad are interested in Premier League players, are his wages. 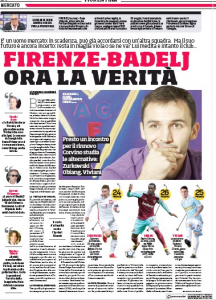 Currently out with a knee injury until the end of the season, the 25-year-old is on more a week than Fiorentina can afford, yet there’s hope a deal can still be done, but that all depends on West Ham.

Corriere dello Sport over the weekend explain the Hammers’ interest in Leander Dendoncker could very well be key in Fiorentina getting their hands on Obiang, and an arrival could ‘open interesting scenarios’.

With a contract tying him at London Stadium until 2022, West Ham are in a strong position to negotiate, and having paid £5.4m for him in the first place, there’s every chance they’ll be asking for quite a lot more if clubs come knocking.