The outlet had already reported a bid of €15m from the Hammers which was turned down by the Lisbon side. But now things seem to be advancing a little.

It’s claimed that Sporting demanded €30m for the sale. At first, West Ham showed they could pay €20m, but could end up making an offer of around €25m this week.

A Bola says this amount would be enough for a deal, as long as the Hammers pay a lot upfront. In that case, the Lions would accept €20m for the move and another €5m in bonuses. 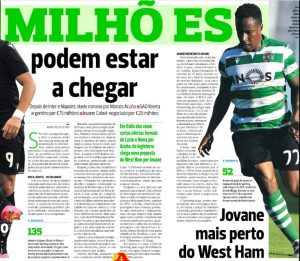 Sporting’s urge for getting the money now is that they’d like to spend it on new players in this transfer window.

Jovane Cabral is one more talent from Sporting’s academy, and had six goals and three assists for the club last season. He struggled with injuries at first, but ended up impressing with great performances once football returneafter the Coronavirus break.