On December 27th, AS reported West Ham are trying to sign Gabriel Pires from Leganes. It was a small article from the Spanish newspaper but full of detail, making it all sound quite believable.

West Ham were said to be willing to pay €5.5m for a January transfer, which made it look like they’d presented a £5m offer which had been converted.

That was for a straight deal, but West Ham also presented a loan offer which would involve €1.9m payment for the rest of the season, and include a purchase clause of €9m.

Fast forward to today, and Marca have an article on the player’s potential transfer.

In a brief snippet, Marca state: ‘In recent weeks Leganes has received offers for Gabriel from some teams of the Premier League, but the answer remains the same: Pay his clause close to €20m. Gabriel is essential, he has only missed three games due to injury in the league.’ 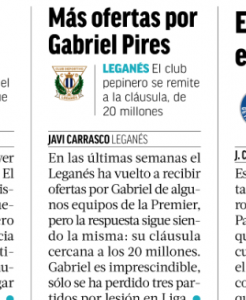 That figure is obviously very far away from West Ham’s and would suggest a deal is unlikely at this stage, unless someone changes their position greatly.

Gabriel Pires is a 24 year old Brazilian, with the work-permit busting benefit of a Portuguese passport.

He’s an attacking midfielder and has a contract with Leganes until June 2021.