Marc Roca has made 23 appearances in all competitions for Espanyol this season, out of which only one has been a substitute appearance.

Tuesday’s edition of Sport explains the midfielder’s good campaign so far has seen him draw attention from two clubs – West Ham United and Inter Milan – in the winter market.

Manuel Pellegrini’s side showed interest in the 22-year-old, while the Serie A outfit were ‘most persistent’ that they wanted to take him on a loan deal with an option to buy.

Regarding the Hammers, the Catalan newspaper claims the Premier League club made ‘official contact’ with the Spanish side for the player. They only asked about Roca’s possible exit in January and made no financial proposal to sign him during the same window.

Luckily for Espanyol, there was no need for them enter into negotiations with West Ham as they referred to Roca’s €40m release clause.

After this, the English club showed no increase in their efforts to sign the Spaniard after realising there was no chance to find an agreement with the La Liga side. 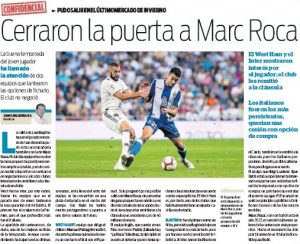 Sport also report that scouts from West Ham are almost there for every match, meaning they could continue to watch Roca and other Espanyol players in the process.

They’re presented as being keen on the club.

Roca could be a target for the two clubs in the summer, but there is nothing mentioned on that in the report.