The chase for William Carvalho has stopped being a one horse race.

The Lisbon media now treats Monaco’s competition as a real threat for West Ham, who continue struggling to find a deal with Sporting.

Portuguese newspaper Record has a story today saying the French side are about to make a bid of €36m plus €5m in bonuses, which should be enough to convince Sporting to sell. 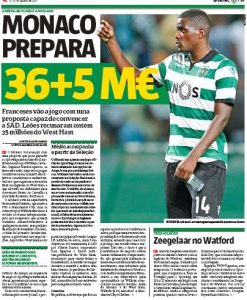 But the Lions still didn’t accept and continue demanding €38m up front.

Meanwhile, Monaco’s offer is considered ‘doable’, and puts them in front.

Carvalho’s head is said to be in London with West Ham, with outlets such as Correio da Manhã claiming  the player is ‘desperate’ to join the Hammers, where he’d make €2m per year after tax.