West Ham United were willing to pay €22m for Celta Vigo midfielder Stanislav Lobotka but were turned down by the player as he prefers a move to Napoli.

Back on the 30th of December, we covered a report from Il Mattino that stated the Hammers were keen on the midfielder and were looking to hijack Napoli’s move for him.

By the 2nd of January that was seemingly dead in the water, with the same newspaper reporting the player had turned down the move to London.

Tuttosport back that up today, and reveal just how far West Ham were willing to go to try and get Lobotka in this month.

They confirm that the Hammers were keen on the Slovakian midfielder, who they’ve been tracking since the summer, and even made an offer of €22m to Celta Vigo for his services.

That matched what the club, and particularly president Carlos Mourino, were looking for before they would agree to a sale.

Lobotka, though, turned down the move ‘in extremis’ as he has his heart set on a move to Italy with Napoli.

He already has an agreement in place with them on a four-year deal worth €1.8m per year and is now pushing botch clubs to get a deal sorted. 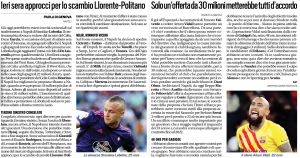 That appears to be forthcoming, with West Ham’s offer having pushed Napoli to make a bid of up to €20m, an improvement on the €18m plus bonuses offer they made at Christmas.

A deal is now close, and he could be on the bench for the clash with Lazio on Saturday. West Ham, meanwhile, are left looking elsewhere for a new midfielder.

It seems Lobotka is not the only La Liga player the Hammers have missed out on this month either.

According to Estadio Deportivo they were also keen on Sevilla striker Manus Dabbur, alongside Aston Villa, but he is set for a Hoffenheim move.