Last Wednesday, reports from West Ham related accounts on Twitter claimed that the club are interested in Oliver Torres, as an alternative to replace Manuel Lanzini.

Coincidentally, Portuguese newspaper A Bola has a story on the Porto midfielder today, claiming that he could indeed be leaving the Dragons this summer.

The article is about Torres’ future at the club, as he’s fighting to gurantee a place in the starting team, something he hasn’t managed to achieve since the arrival of manager Sérgio Conceição.

Now even though Porto’s intention would be to keep the midfielder in the squad, there’s still a chance he could leave the summer, at least if the right bid arrives. 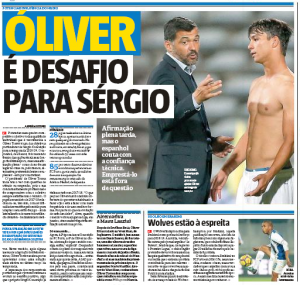 Porto spent €20m to sign Torres from Atletico Madrid last year, and to sell him, they want at least to recover the investment.

According to A Bola, there’s no chance the player can leave on a loan deal.

In the same article, A Bola covers these claims from England about West Ham’s interest, but for now, the newspaper doesn’t have any information of their own to add to it.