West Ham United are named as a suitor for VfB Stuttgart’s Saša Kalajdžić.

That’s what Kicker are reporting and add the Hammers are among the interested parties, along with RB Leipzig and AS Roma.

Operating as a centre forward, the 23-year-old has netted 13 goals and managed four assists in 24 league appearances.

Stuttgart sporting director Sven Mislintat has stressed the need to sell players in order to help the club take the next step.

With Kalajdžić attracting interest from West Ham, Leipzig and the Serie A side, the money that can be earned through his sale in the summer is ‘lucrative’ in the ‘view of the current development’.

According to the report, the frontman is currently on the transfer target list of top clubs, ‘especially in England’. Kicker only mentions David Moyes’ side from the Premier League and they add Kalajdžić is valued around €20-25m for the summer.

The player himself refuses to discuss his future as his asking price could increase if he impresses at the European championship. 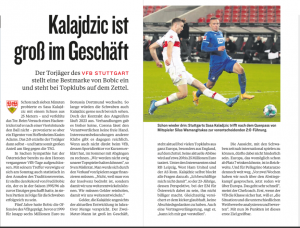 “I am not concerned with this. I can well imagine an extension of the contract,” he stressed.

Despite his comments, Mislintat admitting Stuttgart’s need to sell some ‘top players’ will come as an encouragement for those who are interested in Kalajdžić.