Home Europe West Ham ‘look at the case’ of signing right back, and another...
SHARE

After a solid first year in charge, Manuel Pellegrini has quickly gone about improving his West Ham squad this summer.

The Hammers have moved several players on, including Marko Arnautovic and Andy Carroll and replaced them with the likes of Sebastien Haller and Pablo Fornals.

The rebuild is ongoing and L’Equipe report that their next two signings could arrive from France in the shape of Djibril Sidibe and Florian Thauvin.

First Sidibe. The newspaper says the Hammers ‘looked at the case’ of the Frenchman and he would cost at least €15m plus bonuses if they were to sign him from Monaco this summer although the Hammers are the second choice for him.

It’s a similar situation with Thauvin as well. Marseille believe this is the perfect market for the forward, who scored 18 goals and registered nine assists in all competitions last season.

West Ham and Valencia are pushing particularly hard for his signature but ‘Thauvin does not seem to be attracted’ by either opportunity. He is, instead, dreaming of a move to 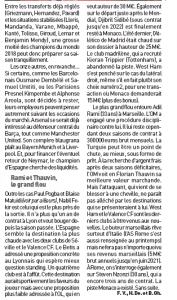 Italy but his best option, Roma, cannot afford his wages.

The newspaper seems to be hinting that West Ham would end up disappointed if they pursued either player, with it clear that neither are particularly keen on the move.

However, the same can be said of Haller and they managed to convince him to make the move, so perhaps the Hammers are confident of doing it again.