West Ham United loanee Felipe Anderson made his first appearance for Porto on Saturday night, and it’s safe to say he didn’t have his dream debut for the club.

The Dragons conceded a late equaliser to Sporting in a play in which the midfielder lost a challenge, and that ended up driving manager Sérgio Conceição mad.

“When the starting eleven began to get tired, I had to freshen up, and you saw the difference in who was inside and outside. Regardless of being quality players, they come to our league and have to understand what is the entity of FC Porto,” said Sérgio Conceição in a press conference.

Newspaper Correio da Manhã says they’ve learned that the player targeted by the manager was Felipe Anderson. They say the Brazilian started on the wrong foot and will now have to work to convince the boss he deserves new chances. 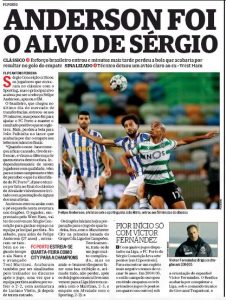 Newspaper O Jogo brings a similar story. They say even though the name of the player wasn’t made clear by Sérgio Conceição, Felipe Anderson was the only signing who came from abroad and made his debut on Saturday.

They even take a bunch of stats to show where the West Ham loanee did right or wrong, and say he now knows how demanding the Porto manager can be.