Over the past few weeks, Bologna’s Amadou Diawara has become one of the hottest properties in the Italian market.

Aston Villa have been the ones in England strongly linked with a move for the young defensive midfielder, with a bid of €17m made to Bologna confirmed by his agent.

They have, however, since been replaced by West Ham, at least according to Il Mattino.

The Naples based newspaper cover in detail their local club’s pursuit of the talented midfielder, and mention the other clubs also interested in the prospect: Roma, Milan ‘and even West Ham’. 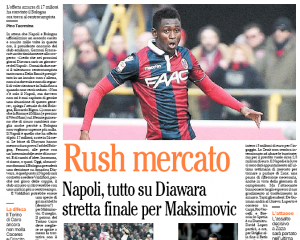 Furthermore, they say Napoli are now in the lead, having offered the most at €17m, which is exactly what Aston Villa are said to have tabled (slight bias here?).

This is definitely the first mention of the Hammers in the Diawara saga in Italy, meaning that either Slaven Bilic has positioned himself on the dossier rather late in the transfer window or Il Mattino have just got confused and mentioned the wrong claret and blue club.

We’ll have to wait and see how this pans out over the next few days.