West Ham United could be given another shot at long-term target Junior Firpo this summer, with the player out of Barcelona’s plans moving forward.

That’s according to Sport, who say the player is not a part of Ronald Koeman’s plans and is set to be sold.

The newspaper explains that after managing to be in the starting XI just 7% of the time this season and accumulating just 800 minutes of football across all competitions, things are pretty grim for Firpo at the Nou Camp.

He’s not under consideration for Koeman, and, as such, the club are looking for replacements moving forward.

As a part of that, they are trying to match him with a suitor, and Napoli have already proposed a two-year loan with an option to buy, which Barça aren’t all that keen on.

They’d prefer a permanent sale at €20m, and there’s several clubs in the Premier League who are interested.

Now, they don’t name these clubs specifically, but we’re willing to bet that one of them is West Ham.

They’ve long been linked with the full-back, and back in January, there were numerous reports about them making a move.

For example, on the 16th, it was claimed his agent had already offered him to the Hammers, and the player was even keen on the move. 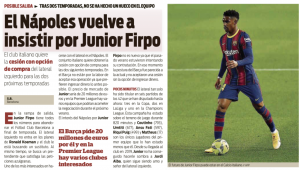 Then, four days later, it was claimed that West Ham could put a ‘more attractive offer’ on the table for him.

This was all followed by claims they could beat AC Milan thanks to their greater financial strength, and the last we heard was that they were on the phone discussing a potential deal with Barcelona.

That obviously never came to fruition, but the interest is clearly there and with Barcelona now keen to sell in the summer, presumably to try and raise funds for Erling Haaland, now could be the perfect time for West Ham to make their move.