A week ago, we covered claims made by Torino Granata that explained West Ham United are among the ‘attractive options’ for Andrea Belotti.

The striker’s current deal at Torino will run down on June 30th and he’s been linked to several clubs in Serie A and abroad, including the Hammers.

According to journalist Rudy Galetti, West Ham United and Atalanta are ‘interested’ in the 28-year-old. The Italy international, however, has ‘not yet decided his future’.

Galetti adds the race to sign him on a free transfer in the summer is ‘still open’ as Sevilla ‘continue to keep a close eye’ on him.

West Ham wanting to the attacker was also reported by Fichajes.net. These claims are relayed in today’s edition of Tuttosport, who then go on to provide a fresh update on his situation.

Tuttosport point out Torino fans ‘still hope’ Belotti ‘can stay’ at the club by signing a new deal. For his suitors, ‘there is an important space’ between ’embracing the idea of ​​hiring Andrea Belotti’ and ‘making a suitable offer that can guide’ his choice.

It’s claimed his first choice is to continue in Serie A, then the ‘main European leagues’ and then outside Europe. 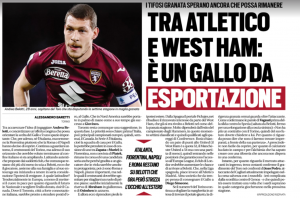 As it stands, none of the Italian sides thought to be keen, AS Roma, Fiorentina, Atalanta or Napoli, have made a suitable offer.

Belotti ‘continues to look around’, beyond Serie A, and his family and entourage, are ‘starting to take seriously the hypothesis’ of moving away from Italy.

If the player were to leave Italy, his first preference is to continue in Europe, where West Ham, Sevilla and Atlético Madrid are in the picture, rather than joining Canada’s Toronto FC.