You thought it was all over, didn’t you? You thought Carlos Bacca to West Ham was a long, distant memory… You were wrong.

If there’s one thing we’ve learnt over the years, it’s that transfer rumours never die, they just go for a quick nap somewhere, only to wake up when the time is right.

Stumbling away from a lukewarm pile of ashes like a half-arsed phoenix, the rumours have started up again in Italy, but only because André Ayew is now injured.

Corriere dello Sport are the ones claiming the Hammers could come back following the Ghanaian’s four month setback, but they don’t sound particularly convinced.

They say Slaven Bilic is now ‘forced’ to once again look for a striker on the transfer market, and a renewed interest in Carlos Bacca could be on the cards. 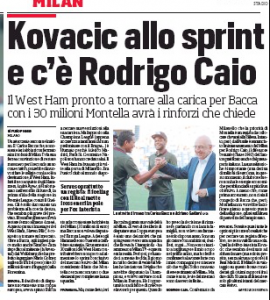 This is all despite the fact the Colombian striker recently told Milan TV he wanted to stay and be a part of Vincenzo Montella’s setup, meaning a move to West Ham seems to be the least of his interests right now.

It isn’t, it’s just a guess from Corriere dello Sport because he was of interest in the past.