Despite a semi-decent spell on loan at West Ham during the second half of last season, Inter are facing a Joao Mario shaped problem in the coming months.

The hope was the Portugal international would excel in the Premier League and someone would come rushing in to acquire his services for around €25m, which is the price Inter have in mind in order to ‘balance their books’ after their initial €45m expenditure back in 2015.

Unfortunately, bar a brief Manchester United mention a week or so ago, no one has come forward, meaning they might end up having to loan him again.

The ideal scenario here would be one similar to Geoffrey Kondogbia, which saw the midfielder have a great season on loan at Valencia to then be bought outright once the campaign ended. 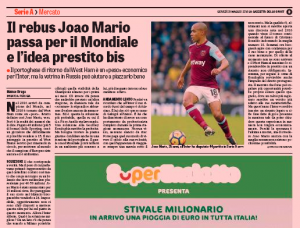 However, that most likely won’t happen, even if West Ham wouldn’t be against seeing the Inter midfielder return, but only on a temporary deal with a non-compulsory option to buy him, report Gazzetta dello Sport on Thursday.

They describe that as what the Hammers would be prepared to do ‘at best’, suggesting another standard loan would probably be preferable.

If that’s all they can get for him, then Inter won’t have a choice.

Only time will tell, but there’s a World Cup between now and the end of the transfer window, and the Serie A club will certainly have their fingers crossed for some great performances.