West Ham United’s interest in Red Bull Bragantino defender Leo Ortiz is a ‘headache’ for Porto, who are also keen on the defender.

That’s according to Record, who say the Portuguese side ‘will not have an easy time’ securing the defender’s signature amid interest from the Hammers.

Reports from Brazil yesterday made it clear that West Ham were ready to push ahead with a move for Ortiz as they look to bolster David Moyes’ squad this summer.

That was followed by comments from the player, admitting he would be more than interested in a move to the London Stadium should it be offered to him.

“I see with good eyes the interest of European clubs. It is always good,” he told Globo Esporte.

“West Ham is a club that plays in the best league in the world, which is the Premier League. They were in the semi-final of the Europa League, and I’m very happy.

“It’s important for me, and I think I’m ready to reach the European market.” 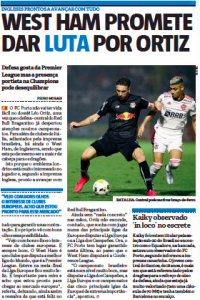 Those comments have come as bad news for Porto, who are also keen on signing the defender and see any Premier League interest as a ‘headache’, according to Record.

They do have one ace up their sleeve, though, and that is the ability to offer Ortiz Champions League football, a factor they believe can ‘unbalance’ the fight for his signature.

West Ham can only offer Europa Conference League football, so the Portuguese giants might have an advantage if it comes to a straight battle for his signature.