Home Europe West Ham with impressive transfer intentions as they get to work ahead...
SHARE

On Saturday as FC Porto beat Sporting Lisbon 2-1, some of Europe’s biggest clubs had a scout, or spy as the Portuguese media call them, in attendance.

Barcelona, Juventus, AC Milan, Manchester United and Arsenal were there, but so too were West Ham. Portuguese newspaper Record report that West Ham had a club official at the match checking out talent.

Porto playing Sporting is one of the best opportunities to watch players in the Portuguese football calendar, with it being one of the bigger matches of the season, and a genuine test. 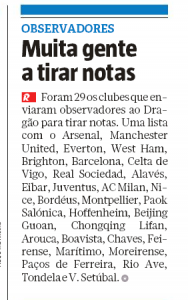 West Ham have been repeatedly scouting Porto over the past few months, in December they watched at least two Porto matches, against Leicester City and Chaves. At the time several possible targets were linked with West Ham, but it’s largely guesswork, and it’s now clear Slaven Bilic’s spy was looking for the summer window, rather than January.

Iker Casillas was one of Porto’s better performers against Sporting, whilst Yacine Brahimi, who has been repeatedly linked to West Ham, didn’t have a great match.