West Ham are considering making a move for Haris Seferović, according to claims coming from Portugal on Tuesday.

The newspaper edition of O Jogo reports the Hammers have identified the striker as someone they could move for before the window shuts. West Ham have asked for information on the 27 year old, and expressed their interest, although there’s no claim of an offer being made or the clubs entering negotiations.

As it stands, it feels like Seferović is an option for David Moyes should West Ham fail to bring in other targets ahead of Friday night’s deadline.

Making 26 appearances so far this season, the Swiss striker has managed six goals and four assists. Despite his high number of matches, he’s recently been getting appearances mainly as a substitute. 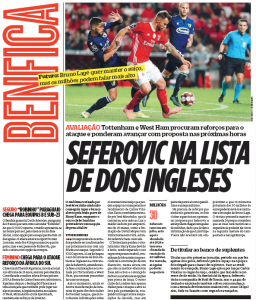 Seferović only extended his contract in July of last year, and it runs until 2024. There’s no suggestion whether any potential move would be a loan or permanent transfer, and there’s no estimated asking price.

Tottenham are also considering the player.

Striker admits he jumped at opportunity to leave Birmingham – Has...

“That’s where I flourished the most” – Ex-forward recalls Fulham spell...