Home Europe West Ham give up on expensive midfielder, offer €30m for two other...
SHARE

West Ham United continue chasing a Portuguese midfielder. The one who’s been playing for Sporting for years, and won Euro 2016. Yes, that one with a €45m release clause.

After a couple of weeks of intense speculation about a William Carvalho move, West Ham have now turned their attention to other players, Jornal de Notícias reports today.

They say with the Carvalho move failing to progress, with Sporting still asking West Ham for more, the Hammers have moved on… but not so far. 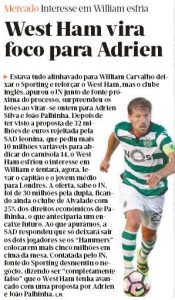 Jornal de Notícias claims the €30m joint bid would even give Sporting the chance to get 25% of a future Palhinha sale, and in response the Portuguese side have asked for €5m more.

Despite a source from Sporting telling JN the deal is ‘completely false’, the newspaper seem more convinced by another source telling them there’s something in this.

Any William Carvalho exit was always going to be messy, and West Ham are finding out just how messy.

If West Ham are so sick of Sporting they decide to move on… it would be surprising if they do so to other Sporting players.