Recently appointed as the new AS Monaco manager after the principality side parted ways with Robert Moreno, Niko Kovać is already hard at work trying to improve his squad.

One of the main priorities is to bolster the attack, where he would ideally like to work with Luka Jović, but Real Madrid have yet to make a decision despite the fact the player is keen to a move to Monaco.

Furthermore, if Wissam Ben Yedder gets sold, he would be replaced with Sébastien Haller, currently at West Ham.

This is according to France Football, who reported this in their weekly magazine, explaining that Kovać would like to ‘attract another of his former players’ from when he was in charge at Eintracht Frankfurt. 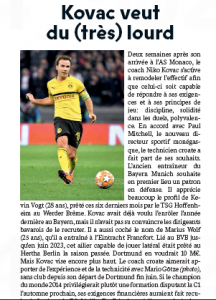 Down the player’s end, it’s said Haller is ‘bored of his substitute status at West Ham’, clearly hinting the Frenchman wouldn’t mind a summer transfer if one presented itself, perhaps even more so if it meant reuniting with a manager who knows how to get the best out of him.

Moving to the London Stadium last summer for £45m, the target man’s return in his first season was of seven goals and two assists in 34 appearances.