The Portuguese press believe the main reason for the trip was to convince Porto to sell Yacine Brahimi. The winger has been linked with a move to the Premier League for several years and has reportedly come close to signing for several English clubs, including the Hammers.

West Ham’s plan was to build up a relationship with Porto, sweet talk them a bit. Then they would conclude a deal to sign Brahimi, who has less than a year left on his contract, at an advantageous price.

Well, O Jogo reckon they’ve hit a rather big bump in the road.

The Premier League club ‘played on the dream’ of Brahimi to star in English football, but it seems the dream isn’t as big as thought… he’s not interested. 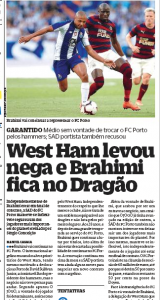 O Jogo say the 28 year does want to play in England, but not at West Ham. They’re not taking pops at the London team and add ‘regardless of the respect the club deserves’, it’s not for Brahimi right now.

He wants to fight for titles and feels that’s much likelier at Porto.

It may have been wise for West Ham to find that out before the dramatic trip.