Former Dutch footballer Aad de Mos is a big figure in Belgian footballer punditry and happy to share his opinion when it’s requested.

In a feature from Belgian newspaper Het Nieuwsblad, De Mos went through several players, and, like has happened a lot in the player’s home country media, talked midfielder-turned-defender down: “The last matches of the season are coming, the scouts are back and Dendoncker is back on level, and it is enough to soon make his transfer.

“But he is not as good as everyone thinks. Dendoncker is not the €38m player that everyone talked about last season. He’s now at the West Ham and Crystal Palace level. I would recommend him to stay with Anderlecht for a while.”

A few days ago, De Mos said: “It will not be at the top. He won’t go to Chelsea, rather to a club like Crystal Palace or Everton. It is important to keep that pressure away. At one point, a transfer seemed more important than his game, which he suffered from. In the past few weeks he is better.”

There’s some ill feeling towards the youngster in Belgium, perhaps feeling he’s got too big for his boots and tried to force a move. But he’s just turned 23 years of age, is clearly a very important player for Anderlecht, and has helped them in both midfield and defence.

It’s not Dendoncker who pushed the €38m price-tag, it was Anderlecht, and the same can be said for nearly all the other fees. After the January window a price of €15m was put on Dendoncker for a summer move, but recently it’s been stated his club could look to get more than that. 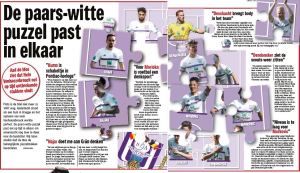 The player hasn’t been suggesting he’s worthy of a top club, indeed it was clear in the winter window he’d have been happy going to West Ham or Crystal Palace, and yet there does feel a need from some involved in Belgian football to continue stating he’s not all that.

No wonder he wants to leave.

Wedged between Anderlecht throwing out the idea of a big fee, fishing for transfer interest, then the club repeatedly rejecting a move, and the media piling pressure on him and being ready to tell everyone the downsides, Dendoncker may benefit from a fresh start.